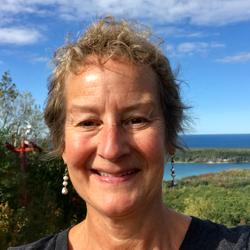 Janet grew up in Columbus Ohio spending summers in Leelanau at her grandparents cottage on Lake Leelanau. Her grandfather was a manual arts teacher in Cincinnati and her mother was an artistic Kindergarten teacher. She grew up with art projects and summer rock collecting.  She attended Lake Forest College, where she took her first silver jewelry construction workshop taught by students in a dorm basement.  After graduating with a major in Mathematics and Physics she began a 38 year career in Information Technology.  In 2004, while living in Milwaukee, Wisconsin, she began re-exploring her interest in Jewelry by creating space for a jewelers bench in her basement and investing in books and tools. Her friend, Barbi Goldsmith (https://www.barbigoldsmithdesign.com/) influenced her artistic aspirations and helped with her studio setup. She also started taking classes in Jewelry Construction at the Milwaukee Area Technical School and making jewelry for herself and friends. She continued her jewelry education with classes at the annual Bead & Button Show in Milwaukee and by continuing classes at the technical school. In 2016 she retired, and moved to Cedar near Sugar Loaf Mountain in August 2017.  She now creates and sells jewelry at local artists markets and art shows and teaches jewelry classes.