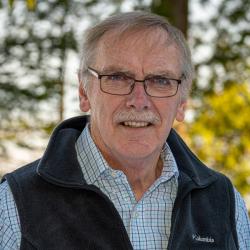 My interest in photography began when I was a college student during the spring of 1969. My grandfather was our family photographer. When he died, I inherited his cameras and his love of photography.  In September 1969, I enrolled in a photography class at Central Michigan University. Photography has been my serious avocation ever since. I used and developed black and white film, built my own darkroom, and by the early seventies, began shooting Kodachrome slide film.  When video cameras became available, I spent several years making home videos. In 2003, I bought my first digital camera, leaving film and video tape far behind.

In 1977, I enrolled in two semesters of adult education photography classes at Jackson Community College. At the end of the second semester, the instructor informed the class he would not be teaching photography classes in the fall of 1978. I applied for the job, and with the endorsement of the previous instructor, was hired and taught classes at JCC the following year.

In 1979 and '80, over fifty of my photos were selected by editors at Benziger Publishing and included in two children’s educational textbooks. Benziger was a subsidiary of Macmillan Publishing.

“Cameras are not allowed in any Michigan prison. If there was a special situation, pictures would be allowed only with strict supervision.” This is what I was told by a regional prison administrator when I asked if I could photograph facility changes I helped manage inside the State Prison of Southern Michigan.

From 1982 until my retirement in 2010, I worked for the Michigan Department of Corrections as a safety and environmental health specialist. My work took me inside every prison, prison camp, and many county jails in Michigan as I developed and implemented policy, work practices, and programs that moved the prison system and jails into compliance with state safety and public health codes.

Several years and many projects after I was first turned down, I convinced the Corrections Department Director that photographs could better make the case that the MDOC corrected public health and safety issues, and complied with current codes at prison facilities. He agreed. From then on, I was allowed to enter prisons with my camera whenever I toured or inspected facilities, or was assigned other projects. I was then and, as far as I know, am still the only person allowed to enter Michigan prisons with a camera and make photographs of the prison operations at my own discretion.

In 2011, I began teaching photography classes at the Cheboygan Area Public Library, and have since branched out to other Northern Michigan libraries, garden clubs, and organizations, including the Crooked Tree Arts Center during the 2017 Ansel Adams photography exhibit.

Recent Achievements:
Main photographer for the Cheboygan Today magazine
In 2018, I was presented with a "Keep Michigan Beautiful, Inc. Award" for my photography.    KMB is a statewide organization that “recognizes programs, activities, and individuals who substantially contribute to environmental improvement, clean up, beautification, site restoration, and historical preservation in Michigan.”