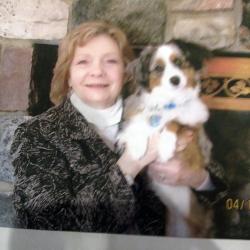 Over the years, she changed her medium from watercolor to pastel and finally acrylic. With Mike Hyrman's encouragement, she started working with Golden Open Acrylics.  Like the cleanliness and flexability of the water soluable medium, she decided this was her medium.

Coming from a long line of of artistic people, it was inevitable Theresa would follow in their footsteps. Her great-grandfather was a fresco painter from Germany. He got a commission to decorate the Traverse City Courthouse in 1907. He and his brother William decorated theaters in Toledo. Family lore has it they decorated the original Mormon Tabernacle.

Theresa's grandfather Karl Ufer was an artist as well. He won Best of Show in the 1916 Exhibit at the Park Place Hotel at the age of 16. The painting was titled "Moonlight," which he painted at night with candles on his hat. He also studied at the Chicago Institute of Art.  There he met his cousin Walter Ufer and was invited to come to Toas, NM to paint. Karl never made it to Toas, but worked as a lithographer in Chicago and continued painting all his life.

Theresa's father Jack Ufer was also very creative with wood and his jigsaw, making gifts like rocking horses, jewelry boxes, and decorative shelving, which he painted or stained. He also did flocking.

Theresa's roots run deep in the community with her many times great-grandfather Kasson Freeman being the first surveyor of Leelanau County and among its earliest settlers. His wife was the first doctress and midwife who attended expectant mothers, coming to see them by horseback.

Working as an artist is an endeavor that doesn't know time. All focus is on the moment, the subject. It is truly joyful.

Being able to produce a painting that others appreciate is gratifying. I have heard comments like "every time I see your painting, it makes me happy." I have also enjoyed donating my art to specific causes. One enjoyable charity event involved painting fiberglass forms of dogs and cats that were then auctioned for the Cherryland Humane Society at the Grand Traverse Resort. Painting comes from the heart and soul and is truly unique to each individual.