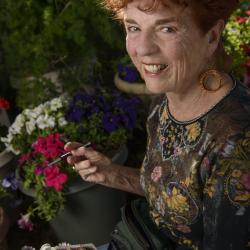 She has produced three hour-and-a-half DVDs covering three-day basic workshop and now added a speed stick of the same information.

Her work has been featured in national juried shows and has received several Best in Show awards. Noted one-person shows include an international show at the Chamizal, El Paso, Texas, sponsored by Mexico and the United States, featuring 56 paintings done by Kath from the Western United States National Parks.

My favorite evaluation so far came from a woman at Canyon Ranch in Tucson after an hour and a half overview of my workshop. She had previously registered in six 5-day watercolor workshops nationally, flying to each with hotel reservations, only to stay a few days in each and leave in total frustration: “You just changed my life! I can do this!!!!!”

From students and former students, I receive letters, notes, and emails exclaiming their delight. “My sketches bring back more memories than my photographs.” “My friend had the sketch enlarged and taped above her head in hospice.”