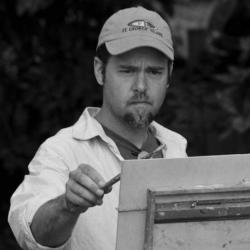 James Richards (AIS) is an American Impressionist painter who specializes in oils. He was born and raised in rural Georgia and spent the days of his youth exploring the farms, fields, and forests of his hometown. Driven by a passionate connection with nature and a deep sense of obligation to relay his vision in the most truthful manner possible, he began painting at a very young age; by the time he was a young adult living in Athens, Georgia, he had already won numerous awards for his pieces.

A Signature Member of AIS, James is a four-time award winner in the American Impressionist Society’s Annual National Juried Exhibition, being awarded Best of Show in 2015 for his painting “Little Chicks,” and third place in 2016 for “Garden of Delight.”

James has spent years studying the nuances of paint and developing a keen sense of understanding and control over the medium. He is now regarded as one of the top oil painters and instructors in the country. He considers teaching and sharing his knowledge to be his primary purpose and true calling as an artist. He is a highly sought-after teacher around the world, conducting workshops across the U.S. and Europe. His mentoring program has a year-long wait list.