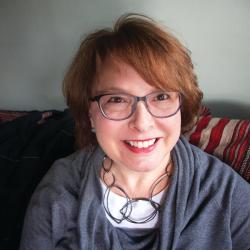 When Christine was young, the sound of her mother at the sewing machine was the sound of comfort in the evening; it was the sound of home and that all was well. Christine spent time repairing various pieces of clothing, from her play-clothes to elaborate priests vestments for her parish. It is not surprising that the act of sewing is deeply rooted in her work and draws on the memory of earlier times.

Christine’s work is primarily about hand-stitching and about recording the concept of time. Hand-stitching is an ongoing process that sustains her interest. The slow methodical nature of sewing is what she finds most seductive about the hand-stitch process.

Christine is equally interested in using traditional and non-traditional materials to make marks in fabric and in three-dimensional installation works that evoke the sense of expressive movement and energy.

She has received multiple awards for her work and in June 2017, she installed a large artwork commissioned for the Bienniale du Lin in the province of Quebec, Canada.