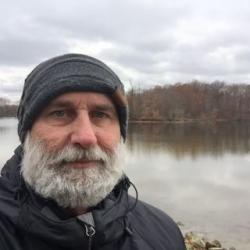 As with so many artists, Michael has been drawing and painting since he was a small child. He won high school art contests and a small scholarship, but it wasn’t until a stint in the Army and getting to visit the Louvre in Paris that he felt the need to get serious about making art a career.

He attended the Center for Creative Studies in Detroit soon after and began working as an illustrator for the several years that followed. Vacations from work were often spent attending painting workshops throughout the ’80s and ’90s, and a move to St. Simons Island, Georgia, saw him teaching at the Glynn Art Association, as well as painting portraits and landscapes.

During a move to Colorado in the late ’90s, he was privileged to be mentored by the late Hollis Williford and introduced to many professional artists in the Denver Group and the Rocky Mountain West. He currently makes his home in Southeast Michigan and finds the woods, fields, and the many Michigan shorelines his favorite subjects.