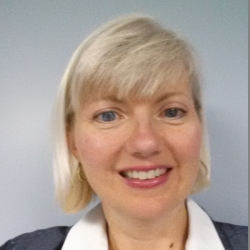 Louise Schlegelmann-Ihm is a versatile artist working in oils, acrylics, and watercolors. A native of southeast Michigan and regular student at the Birmingham Bloomfield Art Center, she relocated to Traverse City in 2008 for her business career. She graduated from Michigan State University in 1987 with a degree in English and Secondary Education and has spent most of her working life teaching computer software to adults and working as a Systems Analyst, while secretly wishing she could be a fine artist.

Since her childhood she has drawn and painted on and off for many seasons. A self-proclaimed art class junkie, she hopes to someday make a living through her art. She thoroughly enjoys the creative process and finds God's handiwork in nature to be her greatest source of inspiration.

In 2008, she won second place at the NMC student watercolor show, and in 2009, she won third place at the Charlevoix Apple Festival Plein Air Paint Out. In 2010, she hosted a solo Traverse City coffee shop show and exhibited at two of Munson Hospital’s arts and crafts shows. From early 2010 to early 2011, she served on the Board of Directors at Artcenter Traverse City and taught a drawing class for young adults.She became a mother in 2012 and is once again finding time to paint. In October of 2019, she completed a large mural at Tabone Orchards and Vineyards on Peninsula Drive on Old Mission Peninsula, north of Bowers Harbor Park. In addition to selling original works, giclee prints, and cards, she has also completed several commissions for private homes.